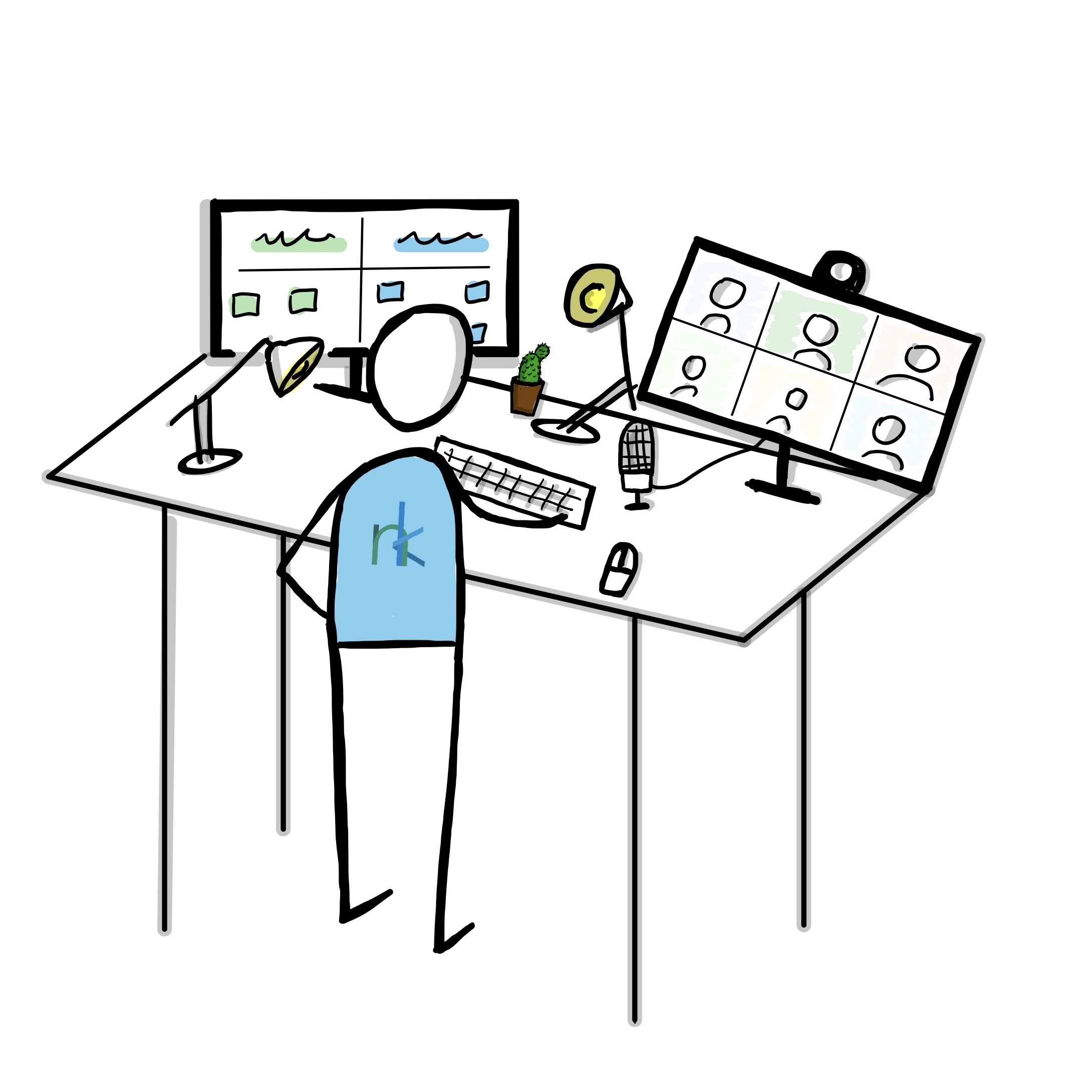 The missing 10 minu­tes before a remote workshop

As a faci­li­ta­tor, I prepare in-person work­shops in many ways, some ways are more deli­be­rate, some less. For example, I think about how the room looks like, the layout of the chairs or tables if any. I make sure that we have enough white­boards, posters, sticky notes, and pens for ever­yone to work within the chosen metho­do­logy of the work­shop setting. I think about the agenda when to take a break, the outcome of the work­shop and many more.

Nevertheless, I have obser­ved that there are some other things that I don’t inten­tio­nally think about, but that help me set the stage of the workshop:

Let’s, for example, think about a work­shop within the office buil­ding of a client. The parti­ci­pants arrive early, go to their desks, hang their coats and get a cup of coffee. They already start chat­ting with one anot­her about the weather or even the upco­m­ing work­shop. They walk past the big meeting room, maybe see me, as the faci­li­ta­tor going through my notes for the last time and see that the layout of the room is diffe­rent than usual. Someone has already taken a seat or has just put down their note­pad on a chair to reserve a good spot…

«Deli­ber­ately set the right stage for a remote work­shop, before the work­shop has even started»

One can say that most of what I have descri­bed happens auto­ma­ti­cally but all of it is part of the work­shop design and helps set the stage for a produc­tive session, and of course all of them I can deli­ber­ately think about. In the following I would like to share with you five tips for being able to exactly enable those emoti­ons in remote settings. Most of it happens before the whole session has even started.

Tips for how to set the stage for a remote workshop

Although I know that you are prepa­ring the actual work­shop anyhow, I recom­mend doing this at least three to five days before the actual work­shop, not just for perso­nal prepa­ra­tion but also for sending it to the parti­ci­pants befo­re­hand (see Tip #2).

Have a clear visual struc­ture, in most cases arran­ging ever­ything from left to right simple does the trick and clearly make the star­ting point on your vast white­board. This will make it easier for the parti­ci­pants to follow you along and navi­gate on the digi­tal white­board during the workshop.

I already include a tiny exer­cise for the parti­ci­pants in this pre-work­shop infor­ma­tion message. I prepare an area on the digi­tal white­board, upload a perso­nal picture of me and share some fun facts about me in the line of ‘what my first job was’ or ‘which secret skill I have’, and ask the parti­ci­pants to do so, too (also see Tip #2). This requi­res ever­yone to check out the tools that will be used and gives me the confi­dence that ever­yone has already opened them before the work­shop. This saves time for the actual work­shop and is a good star­ting point for the entire work­shop as a check-in (see Tip #5). Ther­eby, you also provide the parti­ci­pants with your contact details early on, if they have tech­ni­cal diffi­cul­ties or anything else.

And don’t forget to lock all the elements on your white­board that you don’t want your parti­ci­pants to edit, move around, or delete.

Take the time to prepare an onboar­ding email for all parti­ci­pants inclu­ding the work­shop sche­dule, explai­ning the tools that are going to be used, and promp­t­ing the parti­ci­pants to set them up – this saves time for the actual work­shop and simul­ta­ne­ously the parti­ci­pants already star­ted to think about the upco­m­ing remote session. Some­ti­mes it is good to send out a little last-minute remin­der one or two days before the work­shop as well.

Addi­tio­nally, you can ask them to have some snacks and drinks around. If the work­shop budget allows it, you might also consi­der sending them to their homes.

Don’t think you can solve a tech­ni­cal problem on the spot. Be prepa­red. Think about some possi­bi­li­ties that could happen and what you can do to solve the issue when a tech­ni­cal problem arises on your side or with one of the parti­ci­pants, like having an extra pair of sticky notes or pens in your bag. If you can, have a colleague as a tech­ni­cal co-host nearby in case there are issues to be solved along the way — espe­cially if it comes to sessi­ons with more than 20 participants.

Most provi­ders enable anyone to either parti­ci­pate via a compu­ter or the mobile phone or even to dial into the call. The latter two situa­tions still require you to be able to have an idea, how to include them easily in the entire workshop.

Go online at least 10 minu­tes before the remote work­shop offi­cially is about to start, in order to welcome the early birds and already start chat­ting with them a little bit, just like in an in-person work­shop setting.

Think about someone who lives by him-/ herself and is about to attend your 9 am ‘Design Sprint’-workshop. He/ she might not have talked with anybody yet when the webcam turns on, as he/ she didn’t have her commute, the little exch­an­ges about the weather while hanging her coat, or the chat at the coffee machine in the office kitchen.

Here you can make use of the pictures and the perso­nal infor­ma­tion ever­yone has already provi­ded (see Tip #1) or use an open Check-In/ Icebrea­ker ques­tion to help ever­yone arrive in the remote setting.

I have made good expe­ri­en­ces with groups of up to 10 people to let ever­yone speak at the begin­ning of my sessi­ons to estab­lish a room of safety and give the oppor­tu­nity to bring awareness to the group. The bigger the group gets the least likely it is to give ever­yone time to speak. Instead, I like using tools such as menti​me​ter​.com that also help to connect the parti­ci­pants and bring focus to the upco­m­ing workshop.

What other tips do you have for prepa­ring remote session? What chal­len­ges have you had? I’d love to hear from you. Please do not hesi­tate to reach out if I can help you prepare your next remote work­shop or meeting.

Published by Vincent Schnor in Allgemein