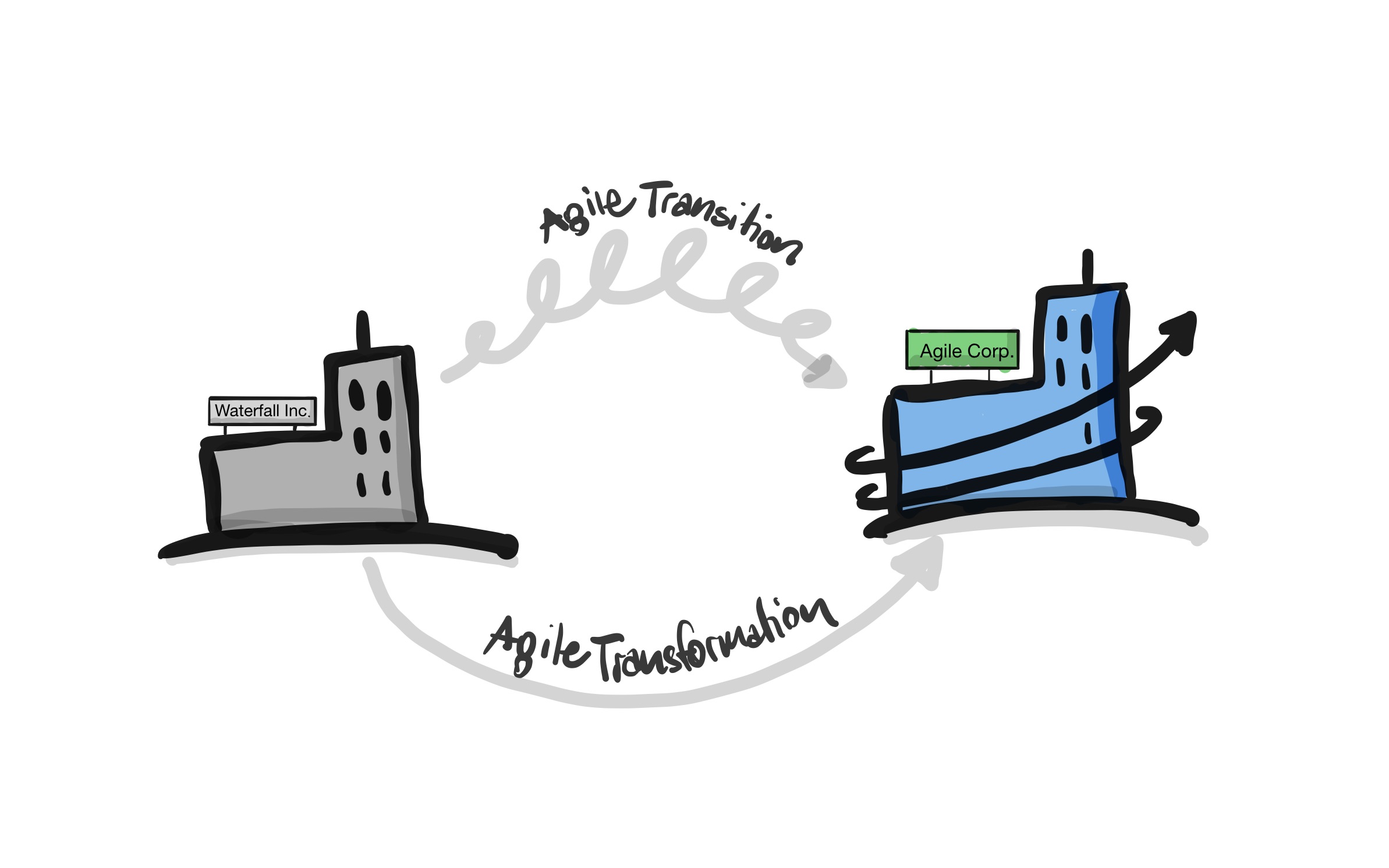 Agile Trans­for­ma­tion or agile tran­si­tion — do you know what you are doing?

I have been asking myself that ques­tion quite a lot during the last couple of years. The next ques­tion coming to my mind is: does it really matter?

In my opinion, it’s not crucial whether you say the one or the other when trying to explain someone on a networ­king event or a family dinner what your job is. “I’m helping compa­nies with their agile tran­si­tion.” will produce about as many Aaahs and Ooohs as “I am co-foun­der of an agile trans­for­ma­tion consul­ting company”. The message is clear: I’m somehow invol­ved in change management.

It obviously does matter when talks with a poten­tial client get to the nitty gritty because both, the client and I, need to know what the job-to-be-done will look like and each of us might have a diffe­rent under­stan­ding of the words trans­for­ma­tion and tran­si­tion.

So, what is the diffe­rence between the two? As I am not a lingu­ist or etymo­lo­gist, this is not to be unders­tood as a scien­ti­fi­cally sound answer or some­thing I would want to write a book about. Howe­ver, in order to ensure that ever­y­body at Netz­werk­kno­ten is talking about the same thing when discus­sing it intern­ally or when getting in contact with a client, I would love for this to be some kind of hand rail.

Are we talking about the process or the resul­ting state?

An agile tran­si­tion can, in my opinion, best be descri­bed as a process that takes you from one state to anot­her. If a company needs to change its busi­ness model because digi­ta­liz­a­tion has made it diffi­cult to keep up with the compe­ti­tion, the efforts of imple­men­ting ever­ything that is necessary will be part of the tran­si­tion. In other words, a tran­si­tion is the descrip­tion of how change is coming about.

Agile trans­for­ma­tion, on the other hand, is the result of the tran­si­tion process. Nokia, for example, has trans­for­med from a rubber boots produ­cer to a mobile phone company. In this case, trans­for­ma­tion is used for the descrip­tion of a condi­tion. One might argue that trans­forming itself is also a process and that is defi­ni­tely true. Howe­ver, using the word trans­for­ma­tion almost auto­ma­ti­cally calls for corre­spon­ding initial- and final states. So, while tran­si­tion might ask the ques­tion how change is imple­men­ted, a trans­for­ma­tion could best be descri­bed by what some­thing has chan­ged into.

So, where does this leave us in terms of diffe­ren­tia­ting between agile trans­for­ma­tion and agile tran­si­tion? Following the line of argu­men­ta­tion of this text, beco­m­ing an agile company would be a stra­te­gic decision. The result would there­fore be a trans­for­ma­tion from a rigid company to an agile one. The process of getting there is called the agile tran­si­tion which is consis­ting of all the small and big measu­res that will help you achie­ving this goal.

If you were to ask us, if we could help you with your agile tran­si­tion, we would presume, that you already have an idea of what your company should look like once the tran­si­tion has succee­ded. We would there­fore look at all the steps that should be taken in order to arrive at that goal. If you asked for support with the agile trans­for­ma­tion of your company or field of busi­ness, we would first work on coming up with a target condi­tion that you would like to find yourself in before talking about how to get there.

This should, by no means, imply that we would first get into an argu­ment with you about whether you (or we, for that matter) are using the correct voca­bu­lary or not. As mentio­ned earlier the diffe­ren­tia­tion between tran­si­tion and trans­for­ma­tion is merely an attempt to point out that there are indeed diverse possi­bi­li­ties of looking at change initiatives.

At the end of the day, we don’t really care about how to call it. We are up for either of these chal­len­ges and in any case we would first be looking at desi­ra­ble outco­mes in order to then define possi­ble small steps in the right direction.

We are very much looking forward to chat­ting with you about your challenges!

Published by Karl Bredemeyer in Allgemein